After running the configure.sh (resp. configure.bat) script, alongside the jamba.sh (resp. jamba.bat) script, CMake creates a project for the given platform: XCode on macOS and Visual Studio on Windows. You can simply open the project to work on the plugin. You can also use CLion.

There seems to be many issues on Windows with CLion. As a result what follows applies for macOS. If you are able to successfully work on the plugin with CLion on Windows, please let me know.

CLion knows how to handle CMake project directly. You don’t even have to run the configure phase in order to open the plugin in CLion. Simply open the folder in CLion and it will load it and run CMake automatically.

By default, CLion creates a folder called cmake-build-debug to do the build. This can be changed under “Preferences / Build, Execution, Deployment / CMake / Generation Path”

After loading the plugin in CLion, the various CMake targets are available as “Configurations”. Here are some recommended ways on how to configure them:

This configuration builds the vst3 plugin (following the quickstart steps it would be acme_Kooza.vst3). You can set it up so that you can automatically run the editorhost program after build if you select Run (resp. Debug) instead of Build. In order to configure it properly you need to setup the Program arguments and Working directory properly:

This configuration builds the vst3 plugin and installs it in the default VST3 installation folder. You can add a VST3 compatible DAW/host as an executable which will then allow to run your plugin directly in the DAW by selecting Run (or debug it by selecting Debug). In this example, the VST3PluginTestHost application (which comes with the VST3 SDK) will be run after install. 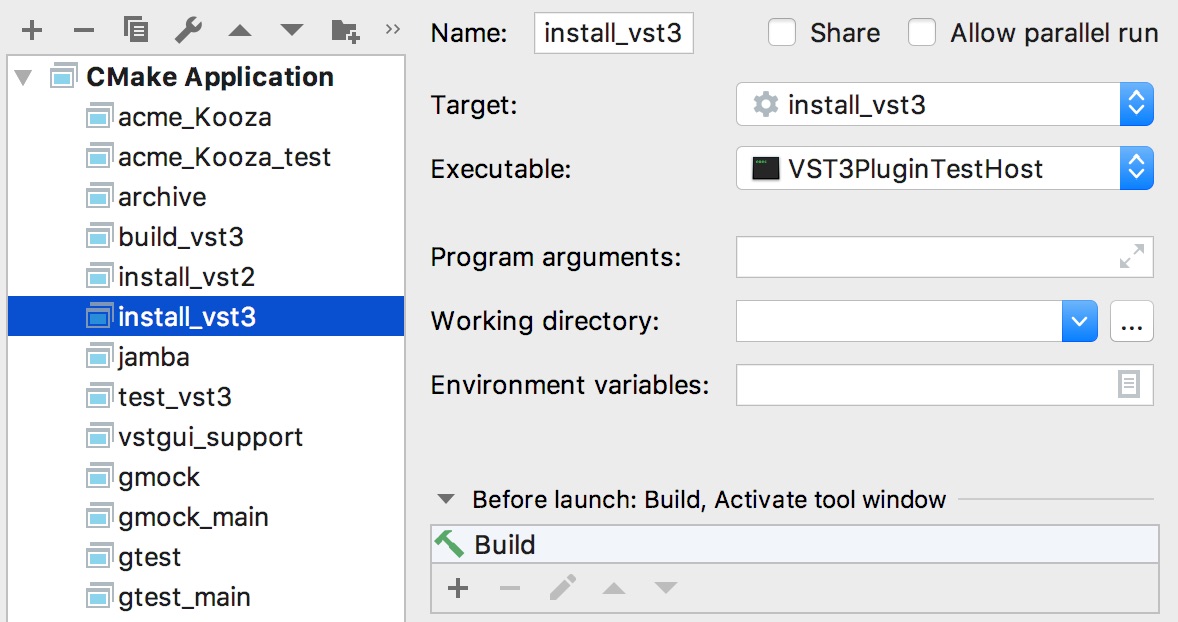 This configuration builds the vst3 plugin (the vst2 plugin is actually the same executable as the vst3 plugin!) and installs it in the default VST2 installation folder. You can add a VST2 compatible DAW/host as an executable which will then allow to run your plugin directly in the DAW by selecting Run (or debug it by selecting Debug). In this example, the Reason application by Propellerheads is setup. 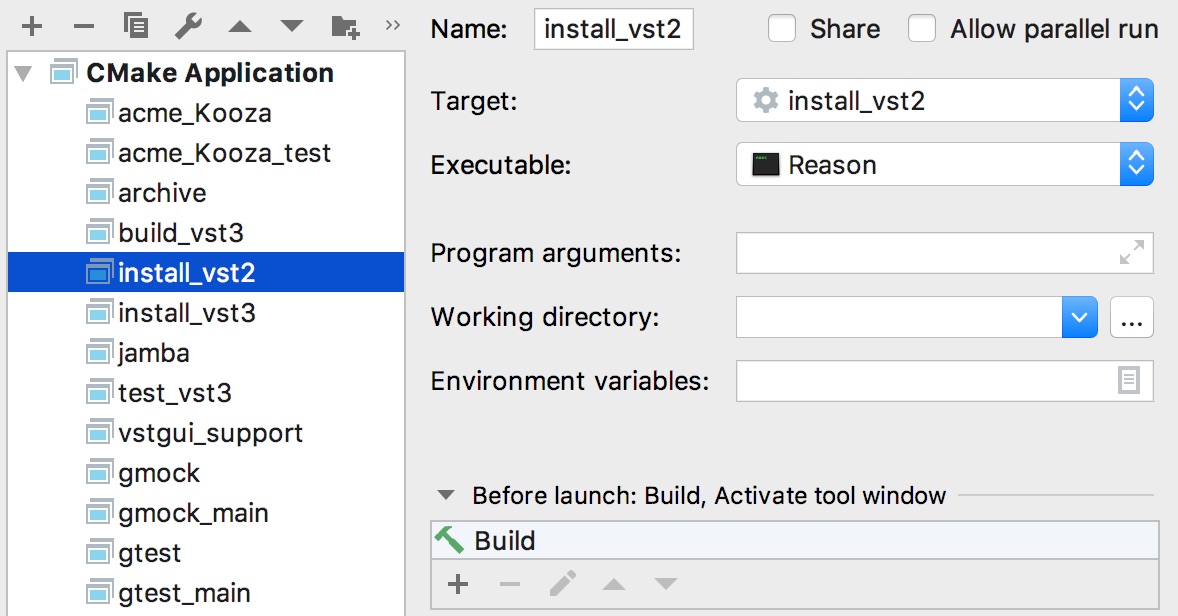 This section assumes that you have CMake Tools extension installed (a Microsoft extension and as of this writing the current version is 1.2.2)

At the bottom of the interface, you can then select the target you want to build (for example [build_vst3]) and then click on Build to build it.

On Windows, if you are using VST2, the build will fail as the pragma #warning is not recognized. Simply edit the <PluginName>_VST2.cpp file to enter a VST2 plugin ID and get rid of the compilation failure.

The plugin comes with 2 predefined configurations to run and/or debug the plugin while running the validator or the editor (see file .vscode/launch.json for details).

You can simply click on the Debug icon in the toolbar and select Run Validator (Debug) (resp. Run Editor (Debug)) to run the validator (resp. the editor). You can add any breakpoints in the code in order to debug the plugin.

Visual Studio Code does not build (or rebuild) the vst or the tools (editor and validator) when you run these configurations so you have to do it manually if you make any changes or the very first time! If you know how to add this capability, please let me know.

You can add other configurations in .vscode/launch.json for example to run your favorite DAW and debug the plugin directly in it!

Jetbrains offer other IDEs that support XCode project (AppCode) or Visual Studio (ReSharper C++), and in theory should be able to work seamlessly with the projects. This has not been tested…